It is a suburban municipality of the city of Thessaloniki. It extends from Mount Chortiatis to the Thermaic Gulf. Its geographic boundaries include the Sheikh Su, Hortiati and Kouri forests.

It features areas of exceptional natural beauty and an untapped coastal zone. It includes the urban areas: Pilaia and Panorama, which is the seat of the Municipality, and the suburban: Filyro, Asvestohori, Exochi and the historical Chortiatis, which is built at the foot of the homonymous mountain and is the historical seat of the municipality.

The actual population of the municipality, based on the 2011 Census, amounts to 70,653 inhabitants, while it occupies an area of ​​approximately 155,8 km2. It is adjacent to Macedonia Airport and the major roads of Thessaloniki. Within its geographical boundaries are located large multinational enterprises, public national and European organizations, public, private and international educational institutions of all levels of education, hospitals and major clinics. There are also the largest shopping centers in Northern Greece, hotels and a number of smaller, mainly commercial ones. 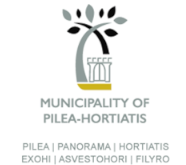 Designed by IT AUTH